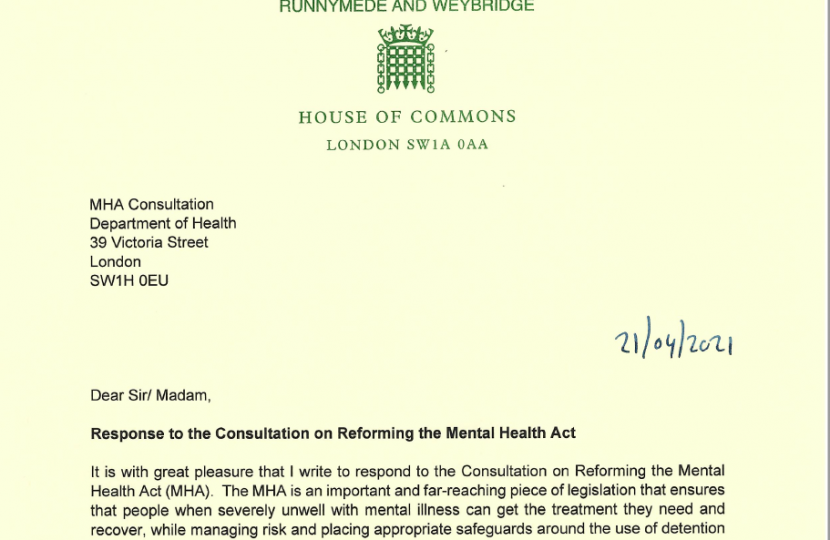 Dr Ben Spencer MP today submitted his response to the Reforming the Mental Health Act consultation, welcoming the proposed improvements to mental health legislation, while also highlighting areas where legislation could go further. In particular the Runnymede and Weybridge MP is calling for greater autonomy for patients, ensuring the rights of patients with mental illness are respected in the same way as those with a physical illness, and ensuring greater parity of treatment between forensic and civil patients.

His response also suggests amendmentsto proposals including the selection of a nominated person by patients under the age of 16, the treatment of patients with a learning disability or an autistic spectrum disorder, and the use of Community Treatment Orders. A copy of his consultation response is available below.

Reform of the MHA is of great personal significance to me, having worked as an NHS consultant psychiatrist before entering parliament. One of the drivers for me entering politics was the realisation that bringing about improvements to the legal framework could directly benefit thousands more patients than any doctor alone could treat, and I hope my experience and expertise will help to bring about these real benefits for patients. I look forward to the opportunity to engage in further detail throughout the pre-legislative and parliamentary processes.

Prior to his election to Parliament, Dr Ben Spencer worked for 10 years as an NHS doctor, specialising in mental health. He was involved in Sir Simon Wessely’s Independent Review of the Mental Health Act as a member of one of its working groups, and holds a Masters in Mental Health Law, focussed on the operation of best interests, and a PhD on Decision-Making Capacity.

Health and Care has never been a high priority than now. While we hope the worst of the pandemic is behind us the recovery is fragile, and the impact it has had on our health and wellbeing, as well as the health services we rely on, will unfortunately remain for some time to come.

Congratulations to Runnymede Borough Council who have successfully secured Government grant funding to support private rented sector households who have fallen behind on rent payments during the pandemic.