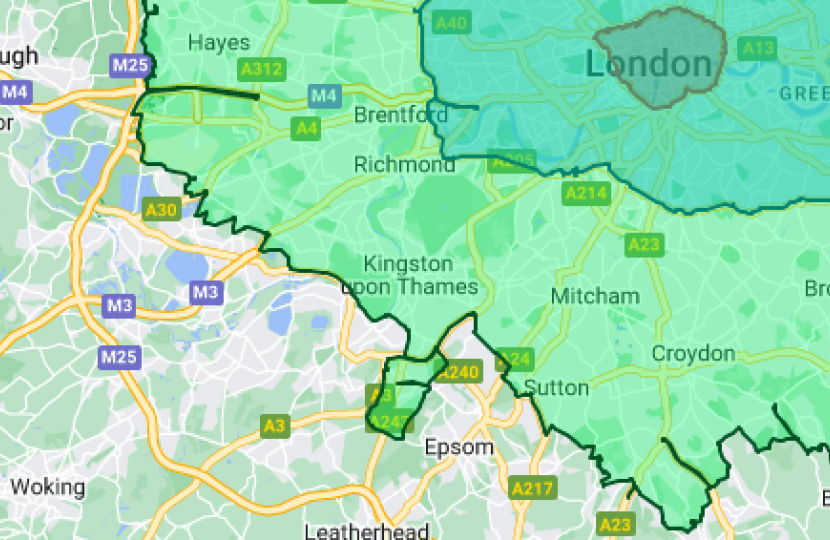 London Mayor Sadiq Khan is planning to expand the Ultra Low Emissions Zone to cover all of Greater London. This would mean thousands of residents and businesses in Runnymede and Weybridge would have to pay a charge to the London authority every time they cross into Greater London by the end of 2023, and risk more traffic being pushed onto our local roads. The full text of the consultation is available here.

The Mayor of London has not only asked TfL to consult on expanding ULEZ to Greater London, but also to develop a proposal for future road user charges for delivery later this decade. This leads to the concern of once the cameras are in place, whose vehicles will be taxed next?

Tackling pollution and reducing carbon emissions is important, and I welcome the Government’s action on this. But an expanded ULEZ is a tax hike on businesses and motorists who cannot afford a modern low emission car, with no evidence that it will deliver improved air quality in outer London boroughs, and a risk of worsening the situation on Surrey roads. This seems little more than a way for Sadiq Khan to fill the black hole he has made in Transport for London’s finances, despite millions of taxpayers pounds in bailouts from central government, an 8.8% increase in his share of London council tax, and at a time residents are already suffering the impact of rising costs.

Areas surrounding London, including the outer London boroughs do not have the same transport options and connectivity as Central London so it is extremely unfair the Mayor of London is proposing plans for expansion.

The proposals would hit local businesses and commuters working in outer London, including key workers, and even those working at or travelling to Heathrow airport.

I have already raised concerns with TfL over the impact of these proposals, and would now ask for your help by signing the petition below to show Sadiq Khan the level of opposition against his tax raid on local drivers.

In recent weeks a number of constituents have highlighted concerns over local provision of NHS dental services.