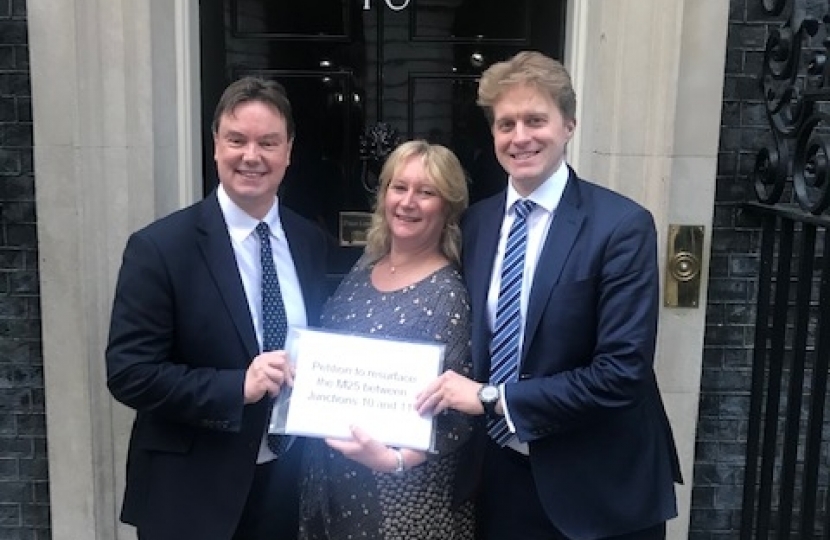 Last week Dr Ben Spencer joined Woking MP Jonathan Lord  and local residents to present a petition to No.10 Downing Street calling for the resurfacing of the M25 between junctions 10 and 11.

The petition, organised by the M25 Action Group, collected 1353 offline residents’ signatures and 2185 online signatures from drivers. The wording of the petition states as following:

“The petition of the residents of Woking declares that the resurfacing work and noise reduction must be carried out on the M25 between junctions 10 and 11, further that this work is needed for the health and well-being of the 48,000 residents living within a 6 kilometer border either side of the motorway; further that these residents, children attending local schools and people who work in the area have been and are currently adversely affected by the ever increasing volume of traffic and continued deterioration of the original surface; and acknowledges that an online petition for drivers has collected a significant number of signatures calling for the resurfacing of the road. The petitioners therefore request that the House of Commons urges the Department for Transport and Highways England to fully resurface and significantly reduce the noise levels on the M25 between junctions 10 and 11."

Specific thanks must go to Cllr Amanda Boote, who set up the action group in 2019 and spearheaded the campaign. Cllr Boote stated:

“It was clear that the noise from junctions 10-11 was making many of my residents in ‘the Byfleets’ very miserable, many of whom who cannot open their windows or use their gardens in the summer due to the deafening sound”

“We have today presented our petition to number 10 Downing Street, along with our local MP’s, who are in full support of trying to get junctions 10-11 resurfaced. This is the only piece of the M25 that still has it’s original surface in a residential area and we need it to be resurfaced for the health and well-being of residents, workers and drivers – especially our young children, many of whom have schools in a very close proximity to the motorway”

Ben said “People across Runnymede and Weybridge are impacted by motorway noise, especially in the New Haw, Addlestone and Row Town areas where it is particularly bad due to the concrete sections of our motorway.  Improving our environment also means tackling noise pollution.  I will continue to campaign on this area to reduce the impact of motorway noise pollution for everyone affected locally.”

Jonathan Lord and Ben Spencer will also be raising this issue in Parliament next week during a Westminster Hall Debate, which aims to further highlight the issue and the need for urgent action to protect residents living either side of this stretch of motorway.

Today I have submitted a response to the Government’s Planning For the Future consultation, welcoming plans to modernise and speed up planning processes, but also highlighting the need for planning policy change to deliver on our commitments of increasing house building, environmental protection